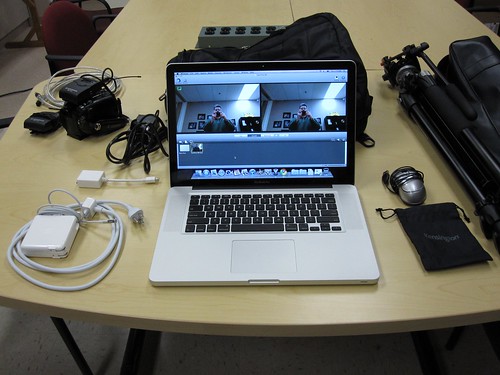 There’s a bit of history surrounding “The Kit”. It all started with a presidential initiative back in 2006. We worked with a company to provide live streaming of lectures, and “boxes” that included all of the hardware needed to accomplish it, such as the computer, audio mixing board, two PTZ (Pan, Tilt, Zoom) video cameras, and a wireless microphone. It all got lugged around in a large rolling case, like something you’d see a band use on their world tour, pushing it in and out of the semi-trailer. It was huge, but it contained everything that was needed – except maybe the tripod wouldn’t quite fit.

The computer was a Shuttle PC with a Video Toaster card inside. I wrote (briefly) about it almost 4 years ago – Time to Make Video Toast. 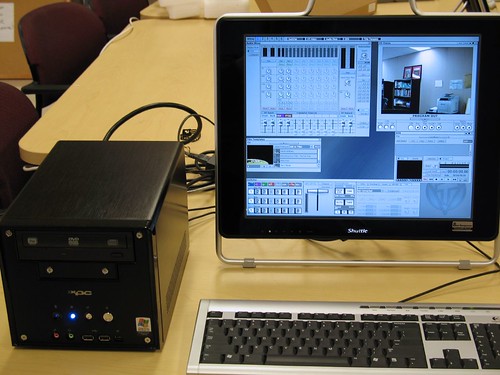 It was a pretty sweet system in its day. Interesting how four years can seem like a generation ago when it comes to technology. This was also at a time when there was the shiny allure of recording in High Definition video. It was an upgrade for the Toaster that didn’t exist, even though HD cameras were available. Nope it was all Standard Definition video, with a composite connection to the Toaster, so the video quality was pretty low. When the time came to stream the video, a lot of the detail was being lost. For the 2009 Faculty Academy we used the Toaster with Ustream.tv. With no built in streaming capabilities (nothing cheap like Ustream anyway), we used an intermediary program called WebcamMax to get the captured video output to Ustream. It worked, and we got good feedback on the live stream, as well as exposing more people to the magic of Faculty Academy.

For 2010, my old Macintosh DNA was re-surging. I had started using a MacBook Pro in 2008, but I was using it to run Windows Vista. Pretty quickly I might add. I began making the switch to OS X in 2009, and I was beginning to investigate video solutions that would replace the Toaster. I found that the Mac platform had an interesting set of developers. There was also this strange phenomenon of bundled software deals available for Macs. In early February there was one called MacHeist. This was the third edition of this “event” and one of the programs included in the bundle was called Boinx TV. If enough people bought the bundle for $49, Boinx TV would be “unlocked”. The software normally sold for $249. I would get Boinx TV and other cool programs like WireTap Studio, Acorn, and Kinemac all for $49.

For Faculty Academy 2010 it was all Mac and Boinx TV. However, we still had the issue of using an intermediary program for streaming. CamTwist, a free program, was used to take the video output from Boinx TV and route it to the Ustream broadcasting page. It works by taking an area of the screen and making your computer think it’s just a built-in webcam (WebcamMax did the same thing). It did pretty well, but it necessitates some window juggling that adds to the interface complexity. The whole system was a general success, though the size of the iMac used was still a bit difficult  to lug around. 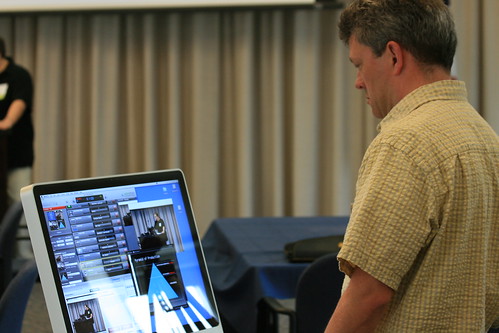 A month later I presented at the 2010 NMC Summer Conference. Using my laptop and Boinx TV, we were inching closer to the ideal. It was a very well received presentation as I did a live show – broadcasted to the live audience and streamed live to the world. It was titled “This Old New Media Center” and the idea was to show how DIY “sweat equity” could be applied to new technologies for someone moderately technology-able to create a live streamed presentation.

At the beginning of 2011, I began to think of creating the ideal streaming kit. It would have to be a laptop, and one with some horsepower as this live streaming/recording is quite CPU intensive. Everything else would have to be compact as well. It would all have to fit in a backpack, with the exception being a good solid tripod. At about the same time, I was asked to be involved in recording our president give a State of the University speech. While we wouldn’t have the kit ready in time for the speech, we were able to cobble together most of the pieces that would ultimately make up the kit. Much as we liked the Boinx TV software, a critical piece to streamlining the live broadcast and recording was using Telestream’s Wirecast software. It has built-in streaming to several different services such as Ustream, Livestream, and Justin.tv to name a few. It also has a relatively simple interface for doing simple shows. It can also be used for some more complex tasks like chroma-keying (green screen) to put different backgrounds virtually in a video. It certainly is the next step in simplified live streaming.

At the 2011 ACCS of Virginia Conference in March, I again did a live show to unveil “The Kit”. I was able to stream live using Ustream and also make a recording, in HD no less, to the hard drive for archival purposes. I was able to present using the Wirecast software to the local audience and also stream the identical program. My Keynote presentation integrated nicely as Wirecast supports playing Keynote QuickTime movies, so I can advance a slide at a time, or even a bullet point at a time complete with the animations and transitions. A resource page for “The Kit” has the recorded presentation as well as a list of the components.

I have since given two more presentations with the Kit, and it really is pretty simple to set up. Thanks to the great network of individuals found in the phenomenon known as DS106, we have already seen this employed for something known as DS106 TV. When the concept of DIY technology is unleashed on talented people, great things happen.