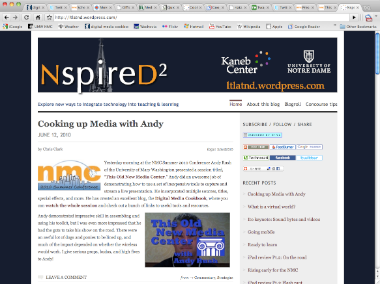 I’m back in the DTLT offices this Monday morning and the jet-lag is still wearing off from my trip to Disneyland, California for the 2010 NMC Summer Conference. I still find air travel surreal. California is not too different from Virginia that it is unrecognizable, but certainly Disneyland IS quite different, and I find myself missing that fantasy land – and the people that I got to hang out with at the conference. It’s surreal that 48 hours ago I was leaving for home. I also realized how much I missed seeing the closing ceremonies of the NMC Conference. It’s special because there is the passing of the torch to the new venue for the next Summer Conference (in 2011 it’s at U Wisconsin @ Madison).

That said, for me the 2010 edition was quite successful. It started with the opening reception and seeing old friends while also trying to follow what turned out to be the final game of the Stanley Cup Finals (way to go Chicago!). The first official day of the conference opened with USC representative Susan Metros giving the welcome, complete with Mini Mouse ears. Mimi Ito gave a thoughtful opening talk that started to go beyond the question of whether this technology stuff is making us smarter or dumber, but rather it depends on what we do with it. She also mentioned the importance of the work of her fellow cultural anthropologist Michael Wesch.

Next up was a breakout session from the Penn State folks, Chris Millet, Ryan Wetzel, and former Penn State, now USC based, Matt Frank on their highly successful student-focused media services organizations. I’m very familiar with Penn State’s Digital Commons, as I have based much of the structure of my own New Media Center here at Mary Washington on the work of Cole Camplese and his PSU crew.

After a brief lunch with Don Henderson and Marco Torres in Downtown Disney, it was back to “work” and watching the Case Western presentation on the Future of Video in Learning. Then my friend Gardner Campbell and his crew from Baylor, Tim Logan and Addy (student whose last name I forgot) reflected on their faculty development seminar using the New Media Reader. Gardner called it his most successful faculty development effort and is beginning to recruit for the next one right now.

The evening ended with a trip to the House of Blues and after getting some food, I faded fast owing to the time zone difference, but not before seeing some serious dance moves being demonstrated by some happy NMCers.

Finally, Friday morning arrived and it was time for my session, “This Old New Media Center“. When I first proposed this session, I had a vague idea of where I was going with this. I simply was re-working the This Old House title and was going to showcase some tools that I use on a daily basis for new media. It wasn’t until later that I decided to do a full-on TV show and use the Boinx TV software to present with – complete with the theme music from This Old House (Fats Waller’s 1935 “Louisiana Fairytale”). It was very well received, and I even got a virtual high-five from Chris Clark from the Kaneb Center for Teaching & Learning at Notre Dame.

The entire “show” and the resource are online and are available at the Digital Media Cookbook site that is featured. Perfectionist that I am, I found plenty wrong or missing, or stuff I just plain forgot or didn’t have time for, but it turned out pretty much like I envisioned.

I’m sure I’m not alone, but when you present at NMC (or anywhere) there is the conference before you present, and then that more relaxed version of the conference after you have presented. More presentations followed on Friday culminating in the “Five Minutes of Fame” presentations that were exceptional this year. Awards for the Poster sessions were presented next and then it was time for dinner.

A wonderful opportunity presented itself as Gardner and I had dinner with Christina Engelbart from the Doug Engelbart Institute. Christina shared some great stories about her father, as well as some wisdom on education, schooling, and child rearing. She has indeed taken her father’s work to a new level, and Gardner and I were soaking up every thought she had about technology and learning in this modern era.

The next morning I was up to catch an early flight home, but happy in reflecting on the energetic 2010 NMC Summer Conference. I missed John Seeley Brown’s keynote, but look forward to watching the video of it as soon as it’s up. I’m ready for next year.