Let me be frank (even though my name is Andy). I do hate looking at my blog and seeing my most recent post was almost a year ago. And then I remember that since then I’ve created a ton of websites for folks at UNF, as well as resource websites that I use for tutorials and general information. At one of those sites I HAVE been blogging.

Let me start with one site that was created to highlight interactive content known as H5P. It was launched back in November, and it was built in preparation for UNF’s OE(R) Week. H5P reminds me of the early days when we were looking for interactive teaching elements for the web – specifically Flash. It was a “cool tool”, but to do anything worthwhile required you to learn some serious programming known as ActionScript. Then along came HTML5 and thus began Flash’s demise. However, it was still a bit of a heavy lift to incorporate interactive content into web spaces. Then H5P came along. It was initially released in 2013 and I heard about it around the time the University of Mary Washington was building the new technology building (2014) known as the “Convergence Center“.

For about 8 years or so it remained one of those technologies that I saw great potential in, but never really took a deep dive into. That is until I saw some workshops and online activity from Alan Levine regarding H5P. Known as the H5P Kitchen, these resources were a highly detailed immersion into a dynamic duo of Open Education Resources – H5P and Pressbooks. H5P was the relatively low threshold tool for creating interactive elements, and Pressbooks being the publishing tool for open source online textbooks. Around the same time I happily discovered that one of my UNF colleagues, instructional designer Jamie Chaires, was exploring this intriguing combination of technologies. So, I did what I’ve been doing for more than 15 years now – build a WordPress website. Here are the blog posts to prove it. 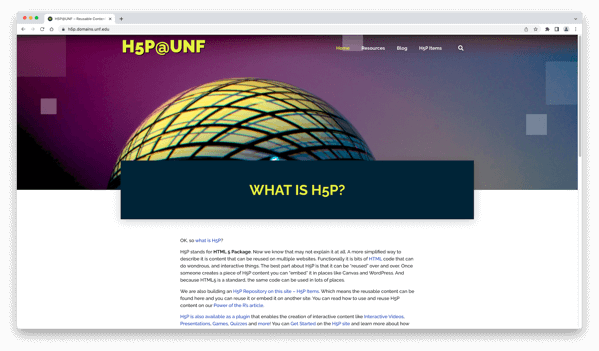 The next website is more related to a post from almost a year ago about UAS, aka “drones”. I’ve had an on-again off-again relationship with drones. Mostly because of federal regulations and some of the disinformation about where these devices fit into our society. I liken drones to the Internet. They have enormous potential for both world changing benefits, as well as literal life destroying capabilities. To me personally they are just flying cameras that open mind-expanding views on the world.

As a service to the UNF community, I created the “Drones @ UNF” website (because UAS @ UNF would fly like a Led Zeppelin). It contains some basic information about regulations and airspace around the UNF campus, as well as pointing to resources on getting pilot certification and some general policies. It’s at least the start of what I hope is another helpful resource. Though my hopefulness is tempered by calls from “legislators” that we must eliminate the scourge of “Communist Chinese Spying Machines” from American skies. Oh brother. 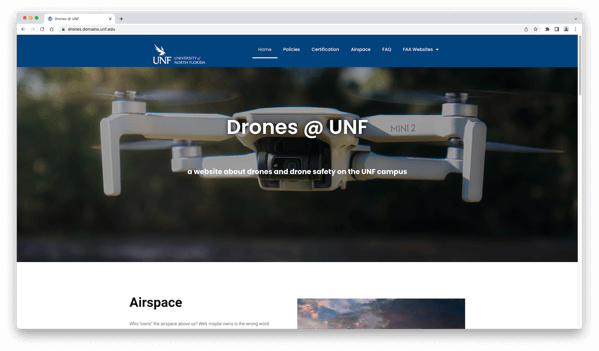 Alright, so in actuality only one of these sites is where I have been blogging (no drone blogging yet). In my defense I will say that I have been trying to make posts to another site that I have been maintaining at least a semi-regular relationship with. My Microblog. This is a place that I make “micro posts” – more than a Twitter post, less than a blog. There’s the site itself at microblog.andyrush.net that then automatically sends a tweet and copies the post to https://micro.blog/andyrush. Maybe this microblog process has contributed to my lack of blog posts as much as Twitter has. I hope to begin to fire on all posting fronts more often. But I always say that. 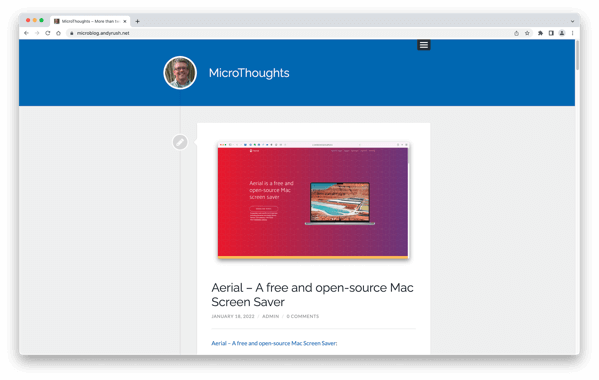 Anyway, as I always say “there is more to come” because, eventually, there is.