Snow Leopard is Great. Except when it’s not. 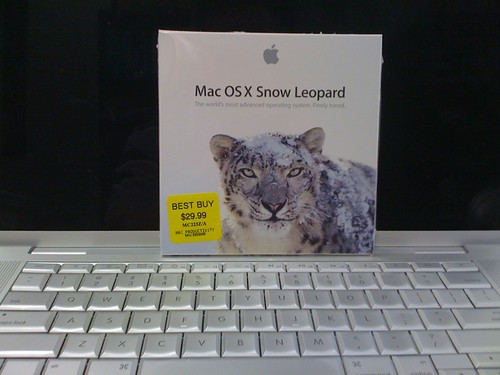 By this time in the conversation about Snow Leopard (OS 10.6), I did fully expect people to report how much more wonderful it was than Leopard (OS 10.5). I guess even in this day where daily wonders occur in the tech world, that it’s naive to think that a new OS will just work, especially a new one. Which is why I am somewhat surprised by the negative reviews. The hype was high, but I also think some people expected too much.

Is it a service pack or is it a full trail-blazing upgrade? The answer to that questions is an unequivocal Yes! It’s going to be different things to different people. Let me quickly give you my recommendation on whether to upgrade now, today, September 2, 2009. If things are working for you in Leopard, there is no reason to upgrade to Snow Leopard now. That, however, is a really simple answer and doesn’t take into account the simple fact that every person is different (Stop the Presses!). I mentioned my reasons for excitement before I upgraded. That excitement has been somewhat muted by reality.

I am writing this in a program, Blogo, that initially did not work when I upgraded. An update was on its way even before Snow Leopard shipped. The program was crashing either immediately or after a few seconds. The discussion indicated that the fix was coming. The fix arrived a day after Snow Leopard arrived. One wrench that Apple threw at the developers of Mac programs was that they released it earlier than expected. A September release was what was announced in June.

My personal experience has been relatively positive. However, I was ready to blame my Ethernet problems on the upgrade. When I did the troubleshooting to figure out why my wireless was working and my wired connection wasn’t, it turned out to be a stray DNS entry screwing things up. When I eradicated the DNS entry, my problems were solved. Another problem that I haven’t solved is with the new Apple Exchange support in Mail. Everything worked fine, though I did need to know some very specific information about my Exchange server (and it only works with Exchange Server 2007, and not previous versions). Once it was all set up, things worked great. Except, I couldn’t delete email. This problem still stumps me and I have since reverted back to using IMAP. Mail now works just like it did in Leopard, but I’ll continue to investigate (aka Google) why Exchange doesn’t fully work on my machine.

What is working? Well for me, plenty. I recently started to use Spaces, and it has been updated to work even better in Snow Leopard. It’s a pretty esoteric change and would be hard to describe, but it just works better. Things are definitely zippier. I notice stuff opening quicker, from images to applications (especially Apple apps). The Stacks feature has been improved as has Expose, albeit minors changes. Overall things just work a little better. Except for those other people who are experiencing the opposite.

Going forward, the Mac OS is supposedly going to be an even better platform to write programs for. Even greater things will be developed and even more cool stuff will be coming. Though with expectations being what they are, for some people they won’t be cool enough. I thought QuickTime X would be REALLY cool. As it turns out it is only moderately cool. There is no Preference menu for the new player and other features are missing. This may need to be the subject of another post, but the point is, I had expectations for QuickTime X that it didn’t live up to. For the average consumer though, it’s probably a wonderful improvement.

I guess that is the take away from all of this. In a few months or a year down the road, people will be saying that Snow Leopard is the best Mac OS ever.

Except for those who don’t think Snow Leopard is the best Mac OS ever.

For an insanely detailed review of Snow Leopard, check out this 23 page article at Ars Technica.

Update: Also check out the wiki for programs that are supported (or not) under Snow Leopard.