If you have kids, you should read this! 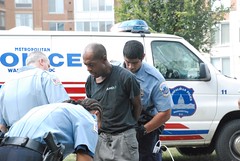 How’s that title for an attention grabber? It basically translates to saying, unless you’re a bad parent, you should drop what you’re doing and pay attention. In blogs, newscasts, and almost everywhere else that you turn we hear the warnings. Scary warnings about food, travel, drugs, and now the de rigueur warning about the hazards of the Internet and [insert dramatic music here] Internet Predators. The latest example is by way of Will Richardson who points to an incident that happened in a Wyoming high school. An officer from the nearby Cheyenne Police Department came to the school and spoke to students about the dangers of predators on the Internet. He used MySpace as an example of where students post their personal pictures and therefore leave themselves vulnerable to those bad people watching out there. Now, while there is some debate about what the officer actually said. Richardson’s point that it is the absolutely wrong approach is right on. He has a suggestion:

Go to your principal or superintendent right now and ask her/him this: Would you really rather have your students learn about safety online from some “authority” figure who drops in and attempts to make them fearful, or from people who they know and trust and see every day in their classrooms who over the course of time in appropriate and balanced ways can educate them instead?

Now I know a few police officers, good men and women all, but I know that their perspective is somewhat clouded by the fact that they see the end result of the "bad Internet". To them it must look mostly bad. So this fear approach to Internet safety doesn’t work any better than other types of "scared straight" education. This results in nothing more than articles like this one from 2003, which starts out like a bad novel. "Christina Long’s life was full of promise." I mean for cripes sake, what purpose does this serve? Christina Long was indeed the victim of a crime, but the Internet was no more of a perpetrator than violent TV, or slash and burn video games. Another example is this pitiful article from Katherine Ramsland.  After referencing the story about Christina Long, she refers to a June 2006 article in Science News:

[The] article reports that nine in ten adolescents utilized Internet resources in 2004, and at least fifty percent went online every day. A lot of them are contacted by predators seeking a viable contact whom they can draw into their net. Most predators have a number of fetishes and paraphilias, so for some, almost any kid who responds will do.

Guess which part of that paragraph were Ms. Ramsland’s words (hint, they’re in bold), because they are, in fact, wrong. Watch the PBS Frontline program Growing Up Online and see how the teenagers talk much more rationally about online life than the adults. Maybe we need to correct some of their laissez faire attitudes, but for the most part they know where the good Internet ends and the bad one begins.

So what is a good source of information that is easily digestible and dispels the myths of online predators? Well, start with the Crimes Against Children Research Center’s fact sheet from the University of New Hampshire. A quick read of this resource will demonstrate loud and clear how much hype there is when it comes to Internet dangers. Kids know when they’re being lied to, especially when we try to scare the crap out of them.