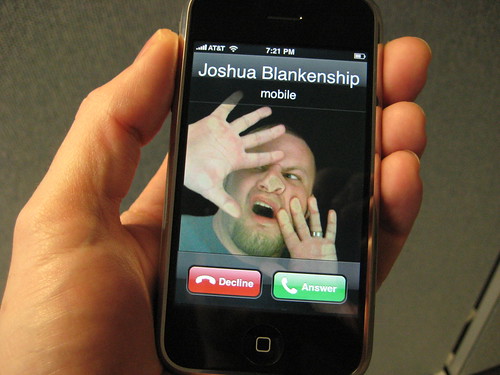 The Internet is great for fact checking. When it comes to fact checking, I find that Paul Thurrott does a great job with this. When it comes to the new iPhone, Paul does some debunking of the hype surrounding the new 3G version. The purpose of this post is to bring attention to his fact checking and to add my own comments. This Friday the iPhone 3G goes on sale and the big headlines are, and Apple’s website says “Twice as Fast, Half the Price”. Walt Mossberg’s headline reads “Newer, Faster, Cheaper iPhone 3G“. Other reviewers have varying headlines and opinions. Now I know that columnists generally don’t write their own headlines (unlike bloggers, hehe), but the bottom line is if anyone tells you the iPhone is cheaper, they are wrong. If someone tells you it’s faster, well it depends. If someone tells you it’s newer, well they couldn’t be more right. It IS new!

So what should the purpose of a review such as Mossberg’s be? To inform a potential buyer whether a product is worth it or not, and to point out a company’s misinformation. This post is not a review. I don’t own an iPhone. I’ve heard great things about them. I know at least two people who own one and they say it’s the best phone they’ve ever had. I may own one some time in the future, but is now the time to get one? Why should I get one now?

If you answer “because it’s cheaper” or “it’s half the price”, your not telling me the truth. If you plan to buy one and not activate it with AT&T (if that’s even possible) or only get a talking plan and not a data plan, then it is cheaper than the previous iPhone. If you do plan on using it (with data) then here’s the breakdown. The original iPhone cost $599. Let’s repeat that one. The original iPhone was $600, and early adopters stood in long lines for it. It then dropped to $400 two months later (iPhone 2.0). Thanks Apple. That phone was cheaper. The new iPhone costs $200, but let’s be clear, that’s “up front”. Let’s break down the pricing plan. I’ll round up to make the numbers simpler:

You must sign a 24 month contract and if you have the data plan, which is what the iPhone is made for, this phone is more expensive to own, period.

As to the “it’s twice as fast” claim, well that appears to be true, if you’re going to use the phone where there is 3G coverage. However, unless you live in a large U.S. city, you’re not going to get 3G. Let’s try saying this – It’s slightly more expensive to own the iPhone 3G, and while the 3G network is faster, the coverage is not where the slower EDGE network is right now. With that out of the way, tell me what’s better about the new iPhone?

The most realistic review is from David Pogue of the New York Times. His basic points are that it is still a great looking phone, the audio clarity for calls is much improved, and the GPS capabilities and other software have been improved. However, he immediately points out that the phone is not less expensive. Thank you, David. Mossberg points out some deficiencies with battery life, but doesn’t adequately dispel the “half the price” myth. The other review that Paul points out is by Ed Baig in USA Today. He also says it’s cheaper, and that’s not in the headline.

Why am I going on about this. Because it’s wrong! Some people can afford to get excited about a product that costs more than the last model. Some people can’t! To hide its costs and say it’s less by half is inexcusable. New models of technology products should give you more for less. I’d even settle for more for the same cost. All reviews of the iPhone should call out Apple immediately for saying it’s half the price. If you were able to get an iPhone from Rent-A-Center for $2000 for two years versus $1840 for two years would they be able to get away with saying it was half-price? No.