I need some AIR

I thought about several ways to begin this post, and I was hoping the title wouldn’t scare people off thinking that I was going to vent. No, it’s not that kind of air. It’s actually Adobe’s AIR, or Adobe Integrated Runtime (yes, I’ll just use AIR from now on). AIR has actually been around for well over a year now. I first used it at the 2007 Faculty Academy here at UMW for a program called Twittercamp, which is a program that would aggregate “tweets” from Twitter and display them on a screen (preferably a large flat panel screen). Alan Levine and I have been using it for the conferences we’ve been involved in the past two years, including this year’s Faculty Academy and the NMC event in Princeton. AIR programs function like Flash programs do on the web, only you download them to your computer. You first need the Adobe AIR “runtime” program, then you can install and use all of the AIR apps you want, even use them simultaneously. There’s no need to open a web browser to use these programs.

The question for a while now has been is it worth downloading the AIR “player” and then installing the individual programs? Is there anything compelling out there to use? I can now say that it’s a definitive YES! The point of these programs is that they are small, and quickly installed. To use the programs, they require that you have a live connection to the Internet, but they function on the idea of working “in the cloud“. So after you get Adobe AIR installed on your computer, go install the following programs: 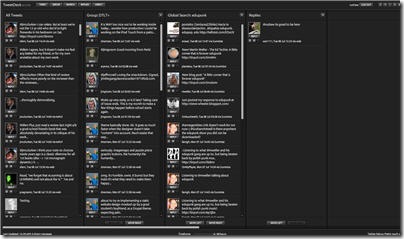 TweetDeck – I’m getting the feeling that this is going to be the next “must have” program, next to using Twitter of course. TweetDeck is one of the many (thousands?) Twitter intermediaries that pull in Twitter posts (tweets) and display them in a unique way. It’s still in early beta (0.151b as of this writing), but it already has some uniquely great features. It allows you to get a handle on how tweets get viewed. TweetDeck sets up as many columns as you need to view your tweets how you want to. The first column is usually the “all tweets” column, but you can move the columns around. You can set up groups by picking individuals that you follow and giving that group a name. Then you see their tweets in another column. You can create another column that is a search term. I used the term “edupunk” and now I get a column that updates automatically with tweets that have the word edupunk in them. You can have still more columns with replies to you, or direct messages. A recent new feature is the ability to collapse the view to a single column. I expect great things from this program. 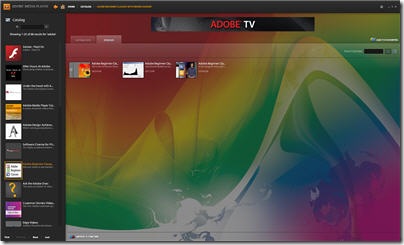 Adobe Media Player – Now you might be saying, “who needs another media player?”, and you’re right. However, this is well done, and if you use Adobe software on a regular basis, there is enough Adobe content to make it worth it. Add to that clips from TV shows and some “HiDef” content, and it makes for a worthwhile download. 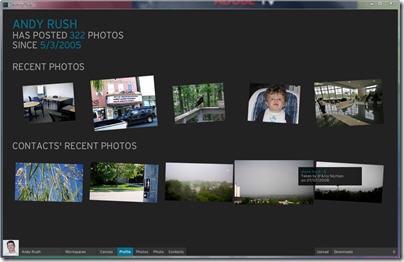 Destroy Flickr – OK, I don’t get why there’s the hostile name because DF is all about a pretty interface for viewing Flickr photos. Photos just look better on a dark neutral grey background, as opposed to Flickr’s all too white web page. Again, it’s a quick install of an Adobe AIR program and you have the many viewing options, called canvases. It remembers where you have been and saves those views in a history, called workspaces. You also have control of uploading and downloading photos to and from your Flickr account. UPDATE: Note the comment from the creator of DestroyFlickr, Jonnie Hallman, below. I got the name wrong on the first go-round. Sorry!

If you want to check out other AIR applications go to freshAIRapps and see just what the potential for the AIR platform is. Note: Because of a current negotiation with Adobe of the use of AIR in their website’s domain, another location for the FreshAIRApps may be at Refreshingapps.com.