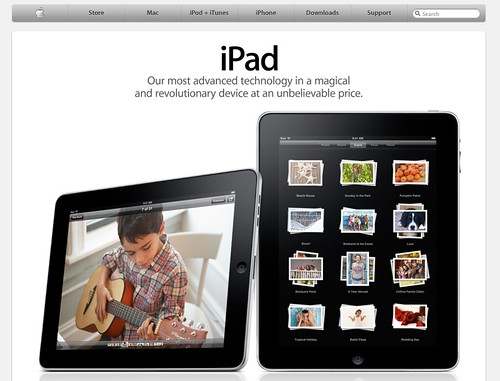 Immediacy. This is the age we live in. I’ve got to have it now, especially information. Apple released its iPad yesterday. People couldn’t wait to find out what it was. People kid me about being an Apple fanboy. I don’t fret about that much. I’m a technology geek. I like and want to find out about all types of new gadgets. I like to find out all I can about gadgets and help to explain what they can do for people who are afraid of technology. Apple just happens to make a lot of cool technology. Notice that I said cool and not essential or good for society, or answer to all our problems.

Now that the iPad is released and the frenzy of what it IS is now over. Now it’s the question of “did it live up to your expectations?” Really? You want my answer now? It wasn’t a movie I just watched, it was a product demo. A device that hasn’t even shipped yet. No one but the earliest testers and Apple Event-goers have even got their hands on it, and the Internet is all “like, well, like what do you like think of the iPad. Dumb name huh?” Fill in your feminine hygiene product joke here. Seriously? When Microsoft released its text editor “NotePad” were people this silly about the name? This silliness will die down.

So now the Internet is rife with comments like “big disappointment”, “where’s this” “where’s that”, right along with “OMG, I gotta have it!”

Wait! Step away from your keyboard and slow the hell down! It will be in Apple Stores in 59 days. Then, go there, pick it up, play with it, and see if you like it, or don’t like it. Here’s some more advice. Make up your mind when you are better informed. Make a decision about whether it is worth it or not, WHEN IT SHIPS! Take your time. Read reviews. Ask yourself if it’s a device that does what you want. This doesn’t look like it’s a new computing device that’s good for creation of stuff. It’s a consumption device. If you want one of these already, sight unseen, you are definitely the type of consumer Apple is aiming this toward. This device is about gobbling up content. Video, music, images, books, podcasts, games, newspapers, magazines, and more stuff we don’t know about yet. Om nom nom. It IS a notepad. You’ll take notes, do some word processing, surf the web, read books, but it’s not meant to replace your computer. Having said that, the computer is not a good consumption device. They’re awkward on your lap (especially desktop computers 😉 ) They heat up to high temperatures and get uncomfortable. They have relatively poor battery life.

This device is a different kind of computer. It’s a giant iPod Touch. And that’s not a bad thing. As good as the iPhone/Touch is, I have wished for a bigger screen to interact with the content in more meaningful ways. The touch capabilities remain the most intriguing feature. I predict people will love using it. Just like I love using my iPhone. Apple made this exactly the way they wanted to make it. They’re not sitting back thinking “oh we forgot Flash”. Apple wants Flash dead. They want to kill it. It hasn’t hurt the iPhone. It would have been nice to have this or that (I wanted a webcam), but Apple did something un-Apple and came in at half of the price that people were predicting, and $100 lower than the lowest prediction I saw.

It’s also another closed system, very much Apple-like. Do it our way. We know best. You want open? Go see the other guys. No? You still want one? Well, go get in line.