The iPad IS Revolutionary…

… WE are just not done with it yet. 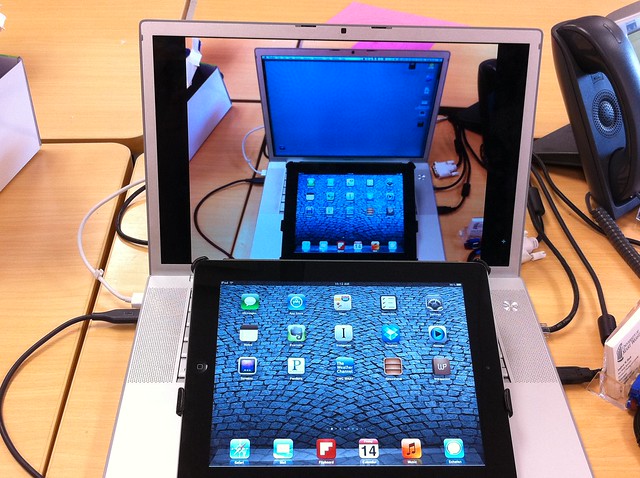 I like my iPad (v2), and as of Monday I’ve been challenged to see how much I REALLY like it. You may know by now that I lost my beloved MacBook Pro to either a bad logic board, or some evil Jim Groom mischief. In all seriousness though, the MacBook Pro is the best computer I have ever owned. I originally got it to run Windows Vista. At the time (summer 2008) I was still scoffing at Macs, but I was more and more looking at software tools for educational uses that were available on both platforms. I was discovering more and more that the software written for the Mac generally ran better and certainly in most cases looked prettier.

So this laptop went everywhere with me. It was my work computer and my home computer. I opened and closed the lid I don’t know how many times and it was (usually) ready for action in seconds. But 10-10-11 is a day that will live in infamy for me. I tried to restart it for (what was) the last time and it never came back up.

So I had to make an appointment with the tech guys with the small phillips and torx screwdrivers (thanks Barry) to retrieve my hard drive so I could use it temporarily with another, identical MacBook Pro (left behind by my colleague Jerry Slezak). Thankfully I can say that I’m typing this using that spare MacBook Pro and I am once again productive.

But what about the iPad you might be saying? Well, the iPad isn’t a productivity machine. I know I’ve said before it was a consumption device. That is basically true. I can do some productive things on an iPad, but it’s the basics like checking and responding to email, and Tweeting. When I get home I can control my Apple TV with it and now with iOS 5 I can view ANYTHING on my big screen in the living room with Air Play Mirroring. I also am dabbling with some audio sequencing and sythesizing software. However, it is still best at reading, listening, and watching content.

So what is limiting the iPad’s use as a creativity/productivity machine? – it’s the software (and surely processing power limits what the software can do). As we know, processing power grows pretty fast, and the iPad 2 looks a lot like the top half of an MacBook Air. You might see where I am going with this. All of the issues with processing power, battery life, and adding peripherals to a device of this size, point to a direction of merging it all into one. Bring your iPad X with you when you need to check email or write a quick post, then “dock” it when you get back to the office. No new concept here.

But there are differences with the iPad and a Mac laptop that make it hard to visualize the convergence of the two. Touch is a wonderful way to interact with a computer, but our fingers will never be as precise as a mouse pointer, or as quick as a keyboard shortcut. But mice and keyboards are much more artificial than touch, so all it will take is a rethinking and gradual evolution of touch computing to accomplish productive tasks. Hell, we may not as a general rule need to touch our computers in the near future, we will speak to them. It’s why iPads and tablets ARE a big deal, because they are the next platform that we will build upon to be more creative. Just remember it’s the humans that are revolutionizing things and not the devices.