Contemplating how green the grass is with TweetDeck 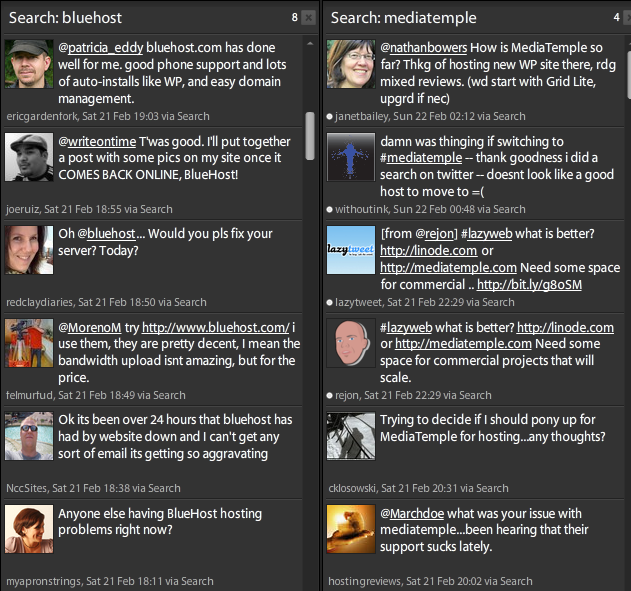 This tale is brought to you by Bluehost, or rather the lack thereof. My account was down yesterday for about 12 hours. I have no illusions that anybody even noticed, but for me it was frustrating because I had a post brewing and I couldn’t write it. Now why couldn’t I write it and post it later? I’m using Windows Live Writer right? Well no because I’m using the Mac side of my MacBook Pro much more lately and there’s no WLW on this side of the grass. I’ll have a post about the Mac vs. PC thing soon I’m sure. (Yes, I know there is a thing called a text editor, but I’m spoiled you know).

Now it may have been a good thing I didn’t post yesterday because it was going to be a rant about how some people are essentially blaming the less well off for the current economic crisis. I’m talking about, among others, that horse’s ass Rick Santelli and Phil “nation of whiners” Gramm. Again, maybe it’s just as well because I can move on now and still get to call Rick Santelli a horse’s ass. Twice!

So just to prove John Lennon’s posit that life is what’s happening when you’re making other plans, I was off doing something completely different than writing a political rant. I was seeing what people were saying about web hosting companies. I was able to listen in on other conversations (and rants) about their web host. Wondering whether the grass was greener, I was seeing that it wasn’t necessarily. How was I listening in on all this? With TweetDeck. If you don’t know what TweetDeck is, it is an Adobe Air application that gives a different view of the Twitter conversation. As I’ve mentioned before, TweetDeck allows you to track multiple conversation with its built in search feature and view it in a separate column that you can track, just like you track what your friends are saying.

As the screenshot above illustrates, I am able to see anyone on Twitter talk about either Bluehost, or another company I am considering, MediaTemple. I have seen both kinds of comments from “I love Bluehost” and “I love MediaTemple” to the more likely “Bluehost/MediaTemple is teh suck” – knowing full well that negative comments will more likely appear on Twitter. Mine did.

What did I learn from the TweetDeck comparison? Ok, so go figure, the grass isn’t always greener. Mentioned also in these conversations was a service called Mosso, that had largely positive reviews. Also, it comes as no surprise that Mosso is more expensive than either Bluehost or MediaTemple. So here’s a summary of what I learned:

Thanks TweetDeck, I sure do love you. I think I’ll go tweet that. There.