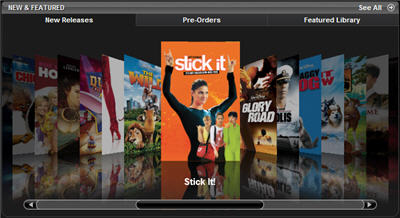 I like talking about video. I like watching TV. I like watching movies. These days the video takes all forms. VHS tape is still around (at least that’s the rumor), DVDs are going strong, and HD-DVD and Blu-Ray videos are making waves. Don’t forget web video. It’s low quality, generally, but still very watchable (ever heard of You Tube?). Last but not least is the video download, or Video On Demand (VOD). Apple recently made headlines by announcing that they would begin to offer movie downloads from iTunes. They join companies like Movielink and Cinema Now in offering movie downloads. All three apparently believe it’s the future. I believe it may be the future, but it certainly isn’t the present.

Hacking Netflix recently reviewed the movie quality of an iTunes movie and concluded, not so much “near-DVD quality” (that’s quoting Steve Jobs), as their screenshots of the DVD and iTunes version of the movie “A Life Aquatic” clearly show. The price of this particular movie is $14.99. You get to put any movie you purchase on up to 5 computers, as many iPods as you own, and you can back it up to DVD for archival purposes but not burn it to DVD for playback (i.e. a DVD data disc and not a DVD video disc). Which means, for most people, watching this movie on your iPod. This is, as Mark Cuban says, killing time. Some people might get a little more serious and hook their iPod up to their TV. Others might already have their computers hooked up to their TV or flat panel and watch using iTunes (that’s how I watch dl.tv and Diggnation). However, most people will be killing time by watching a movie on their iPod in an airport, on the plane, bus, train, or in the back seat of a car (hopefully not while driving, but these days you never know).

Apple also says that download times for a two hour movie (1.5 GB) are anywhere from 20 minutes to 3 hours. That 20 minute download isn’t what most people are going to experience. Where can I connect to that tube? So this is the other problem with downloading movies. In other parts of the world a movie of this size can be had in under 10 minutes, but most people in this country are reaching a ceiling for download speeds, with only incremental increases. So at least an hour or two is going to be the norm for the tech savvy out there. I shudder at the thought of where dial-up users fit into this. FIOS is the technology most likely to make movie downloads sensible, but that’s in limited areas. So here in the present we have Blockbuster or Netflix for movie rentals, and Amazon, Besy Buy, Target, etc. for movie purchases. Watching video on iPods is for killing time.

Epilogue: One of the reasons I have an Archos video player is so I have the option of recording my DVDs directly to my portable player (there is no external output for Macrovision-protected content). Something you can’t do legally with an iPod, because you break a silly law.