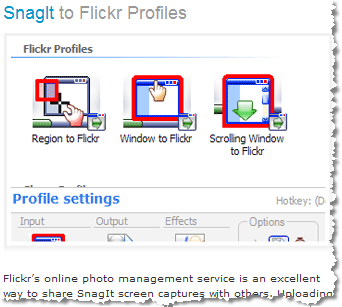 No sooner did Alan Levine have a bone to pick with Flickr, TechSmith’s SnagIt! comes along and (as far as I can see innocently) makes available a plugin to upload screenshots to the Flickr service. I think this is wild, because while Flickr is playing hardball with Alan (and certainly SecondLife screenshots are much more “photographic”), a major software company is taking advantage of the Flickr API to supposedly violate the user agreement. Another crazy angle to this story is the screencast that TechSmith does has the demonstrator capture a photo with the SnagIt! software. Did they plan this because they know something? The consipiracy theorists are lining up as we speak!

Here’s another screenshot on the Flickr service that’s I “took” that I find interesting. It’s the screen you see to accept the “permissions” for the SnagIt plugin!

UPDATE: Eric Rice and 3pointD have assisted in getting out the word about Flickr’s controversial policy.