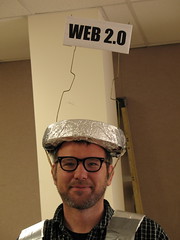 So we’re nine days on in the era of Edupunk, and it appears things are perhaps calming down, but not before some rather intense discussions, conversations and kicking over some garbage cans. Let’s see there’s Jim’s original post, the comments, the definition, the critique, the defense, the “narcissism”, the Wikipedia article, the other article (and the comments), and finally the end. There have been lots of arguments about what Edupunk is, whether it’s even worth talking about, along with all of the other non-productive hand-wringing and smack-downs. In less than a fortnight we’ve gone from a made up word, to a term, to an ideology (puhleeze).

Look. See the picture at the top? It’s Jim Groom. Who on earth would take this guy seriously? This is the man, your hero, that coined the term Edupunk (or is it all caps – EDUPUNK?). Need I say more? Do you know what Jim posted about right before his seminal Edupunk meme (Jim says it’s not a meme, by the way) was born. He blogged about ME. What about me? How do I fit into Edupunk? Why didn’t I take off as a meme??? Seriously.

Hey, we kind of know what “Edu” is all about. Everybody is doing their best to make a difference, trying out things, making mistakes. You know learning. “Punk” is about anger. Sometimes misplaced. Often completely irrational. There were some very ugly people associated with punk in its early days. They were angry. Angry at authority. It wasn’t productive. They would eat their own. They would self-destruct. Think the guy in the foil hat is “punk”? Seriously?

So with punk already 30+ years on, Jim started a little revival, angry at the corporate hijacking of education. Um, in case you haven’t figured it out, Jim can be a hot head. Hyperbole flows in his veins instead of blood, but he’s a good man. Someone I am glad to have here at UMW, and proud to call a friend. Someone I take great pleasure in cutting back down to size once in a while . . . OK a lot 🙂

So here’s how it kind of happened, as portrayed in a scene from one of my all-time favorite movies Sid & Nancy.

Here are all the pretenders that think they know Edupunk.

So let’s go a little lighter with the Edu-“punk” mantras. We all know education has to change. Just let’s not be punks about it.