In praise of a good fight 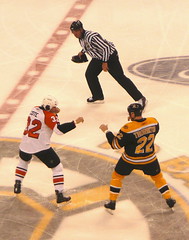 I haven’t had a lot of time to watch much hockey this season. Honestly, if I can’t watch the games in high-definition, there’s even less motivation to watch. Also, the “real hockey season” (the playoffs) is fast approaching, and with the announcement of more HD channels from my local cable supplier, I will be taking in more games.

But this isn’t a post about Hi-Def TV, HD-DVD vs. Blu-ray (that fight is over!), or even hockey per se. It is about a well written post entitled Fighting words. As most of the serendipitous discoveries come from my connections to colleagues on Twitter, this is no exception. It’s another remarkable benefit of the Internet as community.

So, how I got to the post. First, a tweet from Jon Udell about finding good restaurants in his community. Next, I visited the page displaying downtown Keene N.H. dining options. Then I took a quick visit to the home page of this interesting project, and then to the photo page featuring pictures from some of the Keene residents. One picture caught my eye, a simple picture of two hockey players embroiled in fisticuffs, and it generated all kinds of complex emotions. Some of the emotions I felt were very personal. I only need to see a quarter of the Boston Bruins logo to have thousands of memories flood back of my earliest days watching hockey. Bobby Orr, Phil Esposito, and Johnny Bucyk, were the gods I prayed to in the early 70’s. There were plenty of fights in those days too.

Other emotions I had were universally human, however. Two people fighting, both repulsive and thrilling. What were they fighting about? What was the cause? Was someone going to get hurt? Will there be blood? How much blood? Thankfully, the link behind the hockey photo went to Lorianne DiSabato’s blog post about a recent Bruin’s game she attended a couple days before St. Patrick’s Day.

Who needs green beer when you can watch an honest-to-goodness hockey fight?

Her post is as good an argument for keeping fighting in the game of hockey as I’ve ever seen, but that’s a minor argument. She goes on to compare the fights in hockey to the dust-up over recent controversial comments involving Barack Obama’s pastor, Jeremiah Wright.

You don’t have to agree with or even like [the] comments . . . though, you have to respect his right to make them.

People will argue whether there is any truth contained in the statements that Wright has made. No doubt that what Obama said is true, that they are divisive. So let’s go, everybody get it out of their system. Say what’s on your mind. I would argue that if Barack Obama wants to be president, he can’t defend Wright’s remarks, even if he believes even a little of what he said. He should however defend without reservation, Wright’s right to say those words. Let’s all then agree to disagree and get back to the game.

We all want to live in a society where we are judged by the content of our character rather than the color of our Zambonis, but still: without the ability to speak freely and even fight, how will we ever learn how to all get along?

How can you argue with a statement that combines the words of Martin Luther King Jr. with a reference to the machines that clean the ice surface at hockey games? That’s right, you can’t, and don’t even try or we’ll have to throw down! Thank you, Lorianne.