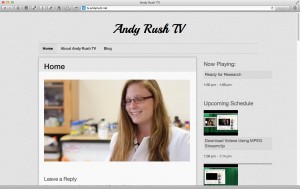 Stuff we said in the past sometimes comes back to haunt us. However, sometimes we are reminded of things we’ve said that sounded like good ideas at the time. We research if it’s possible and then find what we need or move on. Because of some of our recent work on the media server, I have gotten a chance to review some of the TV shows we did more than a year ago now. On December 14, 2011, Tim Owens and I were doing our 101st DTLT Today episode. It was a show about the Opening of the Venice 2011 Art History Exhibit. Tim and I had recorded the students giving their presentations. We also streamed it live for anyone who cared to watch at that given moment. At about the 5:10 mark in the video Tim talks about publicizing this idea to more professors and encourage them to not keep student presentations “behind closed doors”.

That subsequently triggered an idea in my head (at about the 5:40 mark), “what if there were a channel” where fellow students, students’ friends at other campuses, or parents could watch these types of presentations on a continuous loop or on a specific schedule somewhere. You know like a TV station.

After the show I began the search for sites or services that offered such a concept. YouTube and Vimeo offered the idea of “channels” to its users. However, it wasn’t more than a “playlist” of videos played in sequence. You go to a YouTube channel and it starts with the same video every time. Vimeo has something similar now called “couch mode” that allows you to watch a channel as a playlist. Neither service has an option that allows you to play a video at 8:00pm on Saturday night. I had hopes back then that something called WorldTV might do what I wanted, and it did incorporate live streaming into the mix, but again nothing really on a schedule. So there wasn’t much to move ahead with, so I moved on.

Fast forward to January 23, 2013 and after re-watching that video I decide to renew the research. What I stumbled upon turned out not to be as earth shattering as I hoped, but cool enough to say it has a lot going for it. So my proof of concept is to build something that I am initially calling Andy Rush TV. The idea is to run videos from various sources, but primarily YouTube and Vimeo. Occasionally, I will want to play a video at a precise time (like 8 o’clock on a Saturday). I will also want to stream a live show to this channel. Well, I’m currently experimenting with something called StationCreator. 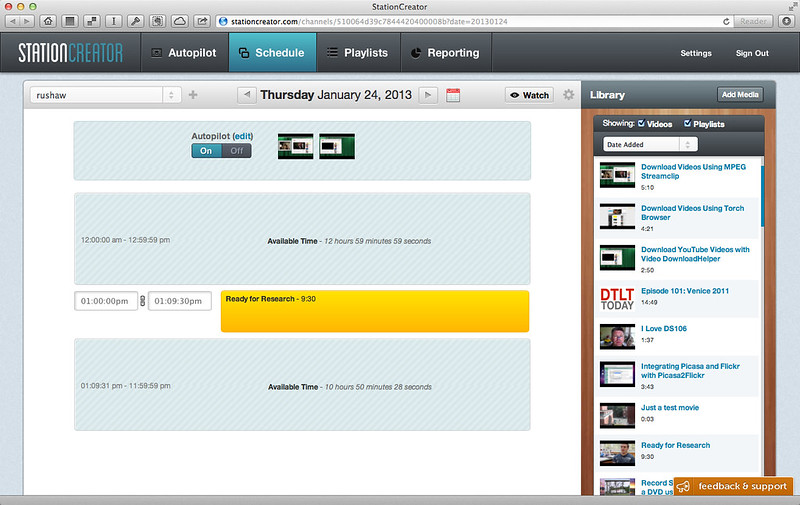 StationCreator is a service that allows you to have a schedule, but also something called “autopilot” so you can have a “station” running 24/7. There are 3 pricing plans. A free account gives you one channel and you can only use autopilot. The “Pro” account, for $200 a month, gives you unlimited channels, as well as scheduling and even analytics. There is an “Enterprise” account (at $1,000 a month) that adds real-time tracking, video hosting and API access.

For this proof of concept, I created a new WordPress site at tv.andyrush.net. StationCreator gives you the embed code to place on your site and that provides the window to your station. Whatever gets scheduled will play in that window. Autopilot videos are played when there is nothing scheduled. Scheduled shows start right when they should. I’m early on in this experimentation so I haven’t incorporated live content yet.

I’ve had some wonky behavior when I insert scheduled videos into the list. Eventually things will stabilize as long as you don’t make a live change and then scheduled shows play nicely between autopilot shows. It seems to be in a beta state right now. Definitely functional, but with a few bugs. I am working to find the way to play the channel on my mobile device. Their site says “We give each station a mobile-ready fullscreen player page on our site, too.” I’m still looking for it.

As I say, it is early on in the game, but it looks like even the “free” channel would work pretty well. When it’s working properly, you do get the “joined in progress” feeling of a real TV station. You also get widget code that can go into WordPress sidebars for what’s playing currently and what’s coming up in the schedule. Autopilot will still give you a schedule of upcoming shows. LOTS of potential here and I hope to put it to a good test. So go enjoy Andy Rush TV now!