About Blu-ray vs. HD-DVD 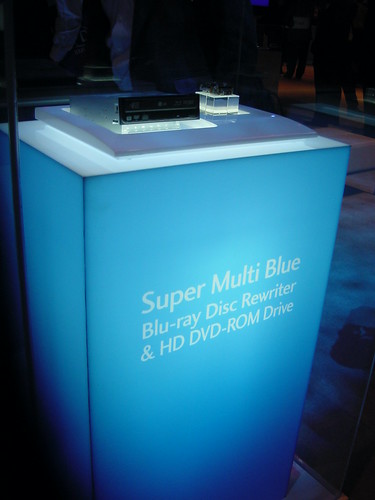 I’d like to elaborate on my first post of the year, which is now relegated to a placeholder for my first lie of the year. My purpose here is to put forth some facts, perspective, opinion, and some predictions. This was probably going to be that first post, but I was still suffering from the New Year hangover. No, not from alcohol, but from the same hangover that any parents have after surviving a Christmas season with a 5 year-old and driving almost 1500 miles. So here are my thoughts on this "format war".

I’ll first disclose that I went with HD-DVD, and I also wrote about this before and proclaimed that HD-DVD will triumph. Well, I’m now ready to switch my vote, at least to the extent that Blu-ray can win this war. Obviously something or things have swayed me to see the blue camp emerge as victor. Was it the announcement that Warner (and with it, New Line Cinema) has decided to go Blu-ray exclusive? Partly. However, there are other writings on various walls that help the decision along.

Here’s the real news. It’s really no big deal, at least not for average consumers, who are NOT caring in droves! Obviously they will care at some point though, and that point is getting nearer with HDTV’s going into more and more homes. But, to their credit most consumers have been waiting, and Blu-ray or HD-DVD players have not been coming home along with the HDTV’s. Now that I’ve called the consumers smart, let me say that they have come to this smart decision to wait, with faulty logic. They are looking to that all too familiar historical format war, VHS vs. Betamax and saying "I’m not getting stuck with a loser." Well that’s wrong when it comes to this war. The losers will be the companies, and not the consumers, that back the losing format, or rather the one that gets absorbed.

Absorbed? Que? What I mean is, unlike the VHS vs. Beta situation, the losing format’s discs will just move to another player that is compatible, and it’s already happening. The LG company is leading the way in this aspect of the battle. They were one of the first to come out with a dual-format player that played both discs. You see this format war is much more akin to the DVD+R vs. DVD-R war. You remember that one right? It was in all the papers. OK, maybe not. It was resolved rather early on. In case you missed the distinction, DVD "plus R" and DVD "minus R" are two incompatible formats of writable DVD media. Both camps touted their strengths and abilities. But somewhere along the way somebody built one of those drives, and eventually a writable drive, that supported both. War over.

Now originally I went with HD-DVD because I was betting against Sony, who has proven that they can screw up, a lot (read my post from July 2006 for the list of abandoned Sony formats). What I didn’t weigh as much were the other backers of the Blu-ray format, Panasonic (who beat out Sony in the VHS/Beta war), Apple, Dell, Samsung and Pioneer. All of them are going up against, essentially, Toshiba and Microsoft. Intel and HP are in there too, but HP is hedging by including Blu-ray drives in their PCs. HD-DVD support also includes movie studios such as Paramount, Dreamworks, and Universal. Now, one of them, Warner/New Line, has defected to Blu-ray, and that is big. Paramount did support both, but they made an announcement of HD-DVD exclusivity (that’s when people thought the war was won by HD-DVD. Silly isn’t it?). That’s not as big news as a defection.

I also went with HD-DVD specifically because of the Stanley Kubrick films, The Shining, A Clockwork Orange, and 2001: A Space Odyssey, were all coming out in HD-DVD only (they are Warner movies). Many others that are desirable to me, like Blade Runner, are available on both formats. Another of my desired films is The Fifth Element, and that is Blu-ray only. I was waiting for either Blu-ray to fail miserably as this is a Sony Pictures release, or wait for it to come out on HD-DVD after Sony ran away with its tail between its legs. Not a very likely scenario from the outset, and even less likely now.

What’s the history behind the war? Well I won’t go into details, but in many respects it was a mini-war between Sun, who wanted Java-based code included for interactive features, and Microsoft, who wanted their code to be used. To get more info on the war and the specs take a look at the Wikipedia articles on HD-DVD and Blu-ray. I’ll have lots more to say about high definition video (including what exactly it is), and the formats that are being used to bring it to us, in future posts.

I’ll leave you all with a few facts, opinions, suggestions, and general wisdom(?).