A solitary bird house on the edge of the woods 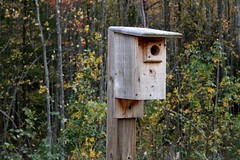 For the last several weeks, I’ve been trying to make a dream, reality. I had been seeing this bird house in my dreams, and as of October 30, 2008, I now have it behind my new home in Spotsylvania County, Virginia. So now that it is over (well, almost – as of this writing we still have a small truckload of stuff to move yet) I can apologize to my DTLT colleagues for being such a basket case the last few weeks. Alright, more of a basket case than usual. I made the classic mistake of falling in love with a house that I wanted to buy. I was also bucking the trend in these poor economic times of going forward with this major purchase. However, along the way I learned more about my determination and more importantly about my friends and family, to make this one of the most valuable processes I’ve ever gone through. This post is to remind me for the future, when I re-read it a year from now, or 5, 10, or 20 years from now, the value we put on things versus the value we put on people.

Now as for a bird, I don’t know how much thought is put into whether a given bird house is in a good neighborhood or not. I don’t know whether the contemporary design will lead to higher resale, or how the previous owners kept the place, but the one pictured above looks like a pretty nice unit. I wonder also if a bird flying in from high in the sky sees this house and wonders whether it’s still on the market. Do they get disappointed if it’s not available? If it is occupied, do they rationalize that “I guess it was not meant to be”?

This was a refrain that I heard from my wife numerous times as we went through the hurdles of buying a “short sale”, which previously I thought meant that the process of buying the house somehow is an abbreviated/quicker version of a regular sale. Boy, was I wrong! A short sale is one that “shorts” the bank who has the mortgage and they agree to sell it instead of foreclosing. The owners of these homes owe a considerable amount of money, so many times these homes are great bargains for the future buyers. We knew the house that existed in front of that bird house was a bargain – but was it meant to be OUR home? When things looked like we weren’t going to get this house, my wife said, “well, maybe it isn’t meant to be.” I said bullshit! (thankfully, I’m able to express myself this way to my wife, and she can be heard to express herself this way to me).

I have the answer to the question for everything as to whether something is meant to be or not. Whatever happens, is what happened. Period. Meant to be? Stop it. There is no plan and the sooner we realize this, the better off we will be. The fact that there is no plan is what’s great about life. If I had listened to my wife about maybe it wasn’t meant to be, then it wouldn’t have been. I would have given up. Now, some amazing things did happen to get this sale done. The title company said that it was the shortest (or at least one of the shortest) amount of time that they ever finished a closing. My real estate agent wanted this to happen as though we were her children. Let me also declare my unpaid endorsement of Virginia Credit Union for all your banking and mortgage needs! People made this happen because lots of hard-working people wanted it to happen. Other things, and people, were merely obstacles to be overcome. Many of the obstacles we encountered had many options for ways to deal with them. We got creative and I/we did our research to maximize our options.

Now, I have to question why I wanted it to happen. It’s a nice house to be sure, but is it better than our old one? There are many memories that we experienced in our old home, not the least of which is that it’s the only house my son has ever known. A few times I got emotional about leaving it. However, something in my wife and me said it was time to go. OK, so I wanted a place to build a new home theater. I wanted a bigger, flatter yard with less trees. I wanted a gas fireplace in the family room and a bigger, more up to date kitchen for my wife (she’s the better cook in the family, just so we’re clear – it’s not because I expect her to be in the kitchen). Of greater importance, though, were things I wanted for my son. A flat place to learn to ride his bike, and more kids his age to play with. I also wanted sidewalks for him and me to walk on, as well as woods (behind the bird house) we could explore together. And maybe, just maybe, there is one more little Rush to come into our family in the near future.

So there. It’s out of my system. I (and others) made it happen. I will invite the many people who were working for us, and cheering us on, over for a big celebration. Time to get to back to work.