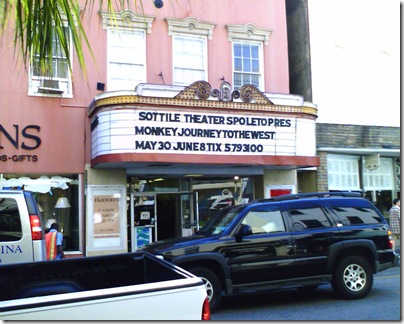 UPDATE: It has been announced that Monkey: Journey to the West will open the 2013 Lincoln Center Festival in July (July 6-28)

It’s about time I blogged this, so why not go with New Year’s Day, 2009. This post could also be titled, “What to do while waiting for a Blur Reunion”. I had every intention of posting this in June after seeing Monkey: Journey to the West at the Spoleto Festival in Charleston, S.C. Busy weeks followed and summer came and went. At the end of August an album was released of the music from Monkey, and it was a surprise hit in the U.K. Should have blogged it then. Next, the trials and tribulations of buying a new house and now here we are at the beginning of a new year. So it’s time to tell you about this wonderful experience called Monkey.

I went with my wife and son and the first few minutes things are loud and everything is coming right at you – and we were in the front row! My then 5 year-old son wasn’t sure what he had gotten himself into. Things settled down a bit after the initial excitement. The story is fairly easy to follow, even though the dialog is in Mandarin. There were subtitles for the show, but for us to see them we were almost literally looking straight up into the air. The show was so compelling that it truly wasn’t worth the pain of craning my neck.

A fine synopsis of the show can be found at Wikipedia, but it’s a classic Chinese folk tale that has been told numerous times. In England, in the late 70’s, Monkey was a TV show that Damon Albarn and Jamie Hewlett loved to watch. Kind of the equivalent of the Kung Fu series here in the states, Monkey Magic memories are what gave Albarn and Hewlett the impetus to work on the opera. Albarn is the musician behind the real-life band Blur, the animated band Gorillaz, and the superb one-off work entitled The Good, the Bad, and the Queen. Hewlett is the animator of the afore mentioned Gorillaz as well as the cultish Tank Girl comic.

As Manchester International Festival (where Monkey debuted in 2007) director Alex Poots points out, the original meaning of the word opera means “works”, meaning different art forms coming together. This is like no other opera you have seen. The unique nature of this show is what has earned it rave reviews. Aside from the one stateside run, the show has mostly played in the U.K. A film version of the production has not to this point been confirmed, but if it ever materializes, I couldn’t more highly recommend that you see it. Certainly, if you have a chance to see the live opera, do not hesitate to get tickets.

In addition to the trailer from the show above, I recommend you take in Damon and Jamie’s Excellent Adventure. Happy New Year!