Master of My Domain

It looks like 2013 will be the “Year of the Domain”. Most of the conversations in the DTLT office seem to have the word domain in them. Domain of One’s Own, “what’s your domain?”, “that’s a subdomain not a subfolder”. My 2013 started out innocently thinking about my domains and specifically my online identity. It also put me in nostalgia mode as I recalled the history of my domain ownership. It began even before the Bluehost Experiment. It was not too long after I moved to Fredericksburg that I decided to start a “Cycling Education Web Site”. It was 2001, and it was called velodynamics.com. It was my first real foray into domains and web spaces besides the university “tilde” sites, and the Geocities and Tripod stuff. I owned Velodynamics for two years. It was good experience and it allowed me to work on my Dreamweaver skills (version 4 and MX). I was very proud of it. Proud of the name, proud of my logo, and even proud that I contacted a cycling photographer in Belgium named Cor Vos to ask permission to use one of his photos as part of the website design.

I let velodynamics.com lapse in 2003. There was no way I could keep up with a such website in addition to a regular job, and more importantly, with a six-month-old boy running around the house.

Also in 2003, a mild-mannered English professor named Gardner Campbell became the Assistant Vice President for Teaching and Learning Technologies. In 2004, Gardner talked to us in DTLT (this is pre-Jim Groom era) about blogging and experimenting in spaces on the web that we could control. My first blog was not WordPress, but using something called B2Evolution. Our web host starting out was a service called “Bloghost” and my first personal domain was awrush.com. When Bloghost declared bankruptcy (and subsequently I lost my domain), we switched to Bluehost. I had another shot at picking a domain, and while andyrush.com was not available, andyrush.net was.

So back to the start of 2013. I returned to UMW from a much-needed holiday break on January 7th. As the DTLT conversations returned inevitably to the Domain of One’s Own project, I had the thought to once again check on the status of andyrush.com. To my amazement it was listed as “expired 12/29/12”. I immediately went through the process to grab it as quickly as I could. Well, not so fast I found out. There would be stages that I would have to go through if I was to have this domain. I read a few articles, but especially this one called How to Snatch an Expiring Domain. As the author states there is a 40 day process that you need to wait out, and while I thought about using a “domain snatching firm”, I ultimately just signed up for Godaddy’s backorder service (because they owned the domain) for about $20.

The first email that I received after the backorder process started was this one on January 23: 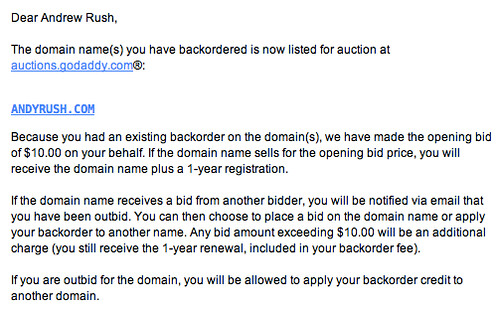 On February 2 I got the notification of the winning auction bid:

So the next step was to go to my web host (MediaTemple) and add the domain to my account (as you can see, I’ve done this before).

Following that I went to Godaddy to change the name servers to point to MediaTemple.

And now . . . andyrush.com. So it’s just a redirect right now, but it’s mine. The treasured “dot com” vanity address. I just keep staring at it. Like it’s a new-born. It doesn’t really do much yet, but there’s so much potential.