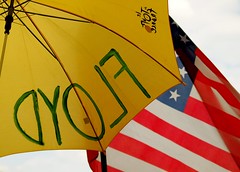 
Many people know that I’m a cyclist. Every year I ride the 150 mile, 2-day event called the Virginia Dare, a ride to raise funds for the Multiple Sclerosis Society. Some people even ask me when I’ll ride the Tour de France, like it really is a “tour” and not a race featuring the best riders in the world. So over the past two weeks, people have naturally asked me about my opinion on L’affaires de Landis – the accusation of him taking banned substances.

First, let’s get the scientific facts out of the way. There are two tests that he failed. The primary one that got the attention of the officials was his ratio of testosterone to epitestosterone. It is a ratio that should remain basically constant. Landis’ fluctuated beyond an acceptable level. The secondary test really nails the detection of synthetic testosterone. The test is meant to measure the difference in carbon isotopes in synthetic and naturally occuring testosterone.

So he’s guilty right? Well, purely based on the results of his test, it is apparently so. However, for me, it is a nagging verdict, and while I don’t tend to be a conspiracy theorist, it is a highly suspicious verdict. The first thing that is questionable is why? Why would he take synthetic testosterone? The effects of it would be increased muscle mass (think Barry Bonds). A great result if you are a sprinter and need lots of leg speed to challenge other sprinters in the flat stages of the race. But Landis is a hill climber and exactly what you don’t need is to carry more weight over the mountain. That’s why the sprinters usually finish dead last in the stages in the Pyrenees and the Alps.

Here’s another point that would fly in the face of logic. Steroids, in order to have an effect, work over a period of weeks/months. Landis had been tested throughout the Tour de France, and the only time he came up positive was after the 17th stage when he came back and whooped the field by 5 and a half minutes. Steroids don’t work like Advil. They don’t kick in over night. Was Landis naive enough to believe that these drugs would help him recover? Tour de France riders are very much informed about what they should be putting into their bodies to perform. They even hire personal chefs to make sure they eat right and that no one spikes their food.

A doping accusation that would make more sense would be that he took EPO, an artificial agent used to increase the oxygen carrying red blood cells in the body. It is a treatment that cancer patients use to fight the intense fatigue associated with chemotherapy. Nothing like that abnormality (a high hemoglobin count) was found with Landis.

Landis has been winning races all year, including the Tour of Georgia in May, where he would have been tested quite thoroughly, over several days, for all banned substances. Nothing. Not until stage 17 of the Tour de France on July 30th. Was this just a last gasp desperate attempt at salvaging what looked like a lost Tour? In so many ways it just does not add up.

And, the main point is this. Even if he did willingly take the steroid, it had no effect, at least nothing more than a placebo-like effect on him. He was THE strongest rider in the 2006 Tour and the fact that he failed the test for this particular drug doesn’t mean it was winning by cheating. Maybe ultimately he should be found guilty of attempted cheating, but it would be a case of botched cheating because he used and entirely incorrect substance to cheat with.

So the conspiracy theory remains to gnaw at me. Maybe there is something wrong with the test (?)

UPDATE: A little bit more info/opinion from Phil Ligget the British broadcaster who covered the race for the Outdoor Life Network